Fall training has been a joy as of late.  I planned for 2 races this October/November:  a 5K this past weekend and a half marathon in November.  As my long runs got longer, I was looking forward to group runs.  8, 9, 10 miles all go faster in the company of other runners, sharing stories, choosing routes and enjoying the general distraction of the company of others.  My first long group run was last Sunday.  My brother-in-law generously picked me up at 6:45am as we headed to North Chagrin Reservation, a local park with beautiful scenery and a mixture of bridle path and paved trails.  We met two other running friends and headed out for what was supposed to be about an 8 mile run.  And then it wasn’t.  About 7 or so miles in we discovered that we were nowhere near where we had planned and that we had followed a different trail than we originally intended.  Upon reading the closest map, we discovered we were nearly 3 miles away from our cars.  And, joy of all joys, several of those 3 miles back would be uphill.  Regardless of the extra miles, I was grateful to be surrounded by friends, outside on a 65 degree October day and putting in miles that are still miles.  Oh, and guess what?  I got bloody, something all good trail runners do.  Here’s the proof.

The Humphrey clan gathered Sunday morning for the Warm Hearts, Warm Hands 5K, sponsored by United Way of Lake County.  The run was held in a local park that my family is fond of and we were excited to participate together as a group.  My kids walked with Grandma and Grandpa and my sister-in-law and niece.  Phil and I ran, along with my brother-in-law.  As we glanced over the small crowd, I made a joke about having a shot at winning our age category for once.  My brother-in-law made a bold start while Phil and I began a conservative pace of about 9:30/mile.  We picked it up along the way, but around mile 2 I got hit with a stitch in my side that I couldn’t run through.  A little walk got me going again, but I realized that any hope for a PR was slipping away.  Phil and I crossed the finish line a hair under 30 minutes.  I was grateful for his company and grateful for any finish under 30 in a 5K.  Jon was confident he had finished in the top 5, so we stuck around for the awards ceremony.  Overall male winners went to the young’uns, all top 3 men under the age of 18.  Overall female winners went to three women who looked roughly my age, including a very pregnant young woman who made me shake my head in wonder.  As age category winners began to be announced I was shocked to hear my named called.  I was convinced it was an error, confident that my time was nowhere near worth an award.  Turns out that a small field of runners give you your best shot at being an age category winner-I beat out a grand total of 4 other women to win.  And my brother-in-law?  Finished in the TOP FIVE of all racers. Despite the enormous gap in our winning times, we scored the same prizes of coupons to local restaurants and a United Way t-shirt.  I may never hear my name called by an announcer at a race again and I consider it a lovely birthday gift for this soon to be 32-year-old.

Oh, and check out the winners: 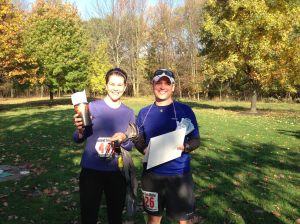