There is nothing I love more than arriving in a new city, throwing on my running gear and heading out to explore it on foot.  There is something about running in a new place that makes the time fly by and makes me feel a bit more worldly than I really am at heart. My recent trip to Savannah, Georgia for the FitBloggin’ conference gave me a chance to enjoy some great travel running. Savannah is a town seeped in a rather fantastical history. Maybe you’ve read Midnight in the Garden of Good & Evil or maybe you’ve heard the tales of a “city built on bones.” Either way, the culture of Savannah is rich with America’s colonial history. Visitsavannah.com shares the following information about its origins: “Savannah’s recorded history begins in 1733. That’s the year General James Oglethorpe and the 120 passengers of the good ship “Anne” landed on a bluff high along the Savannah River in February. Oglethorpe named the 13th and final American colony “Georgia” after England’s King George II. Savannah became its first city.”

I took a ghost tour on my first evening in Savannah and it was a great way to hear the tales and to also see the beauty of the historical buildings in the city. But, I really needed to see them in daylight, so on my second day in the city, I headed out to run. Savannah is a traveling runner’s dream. Turns out that Mr. Oglethorpe designed a city that would be easy to navigate for out-of-towners. The original city was designed with 24 squares and 22 remain today, some with parks and fountains gracing their centers. So, as a runner, you essentially navigate a grid and can easily get back to your hotel with little worry about a GPS giving you turn-by-turn directions.

I checked in with the concierge at my hotel and he provided me with this great map that suggested a running route. If you’re staying at a large hotel, be sure to ask if they have a small map available, just in case you’re paranoid of getting lost (as happened to me on a previous vacation!).

I headed out and used the map to guide my initial steps, and then decided to explore. Here are a few of the natural &  historical sites I got to take in along the way:

As I neared mile 1.5 of my run, I noticed a large group of Girl Scouts and realized I must be near the home of Juliette Gordon Low, founder of the group. I stopped by and peaked in and enjoyed seeing all the young women excited to be seeing her birthplace. 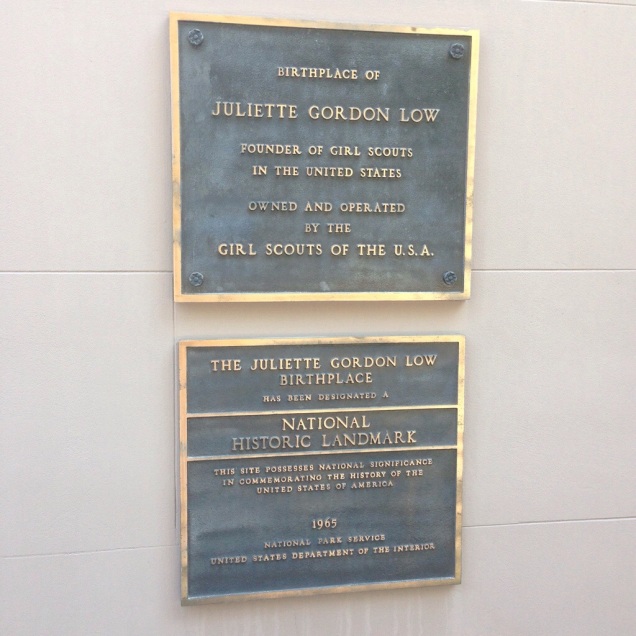 I headed next to Forsyth Park and looped around once to add another mile to my trip. Runners were everywhere on this path and I can see why – the shade of the trees that line the park give you some great relief from the heat and the park itself was hosting two different exercise classes and a farmer’s market as I was running by. One loop around the park = 1 mile, making this a great way to extend my run without having to navigate at all.

My final stop, after circling back to find it, was to see the famous bench where Forrest Gump awaited a bus to see his Jenny. I found the square – Chippewa – and realized there was no bench. I later learned that the bench had been removed and placed in a museum, but stopped anyway in order to see where the scene had been filmed.

My run in Savannah was great. If you’re heading there and plan to run, here are a few recommendations based on my experience:

6 thoughts on “Running in Savannah”